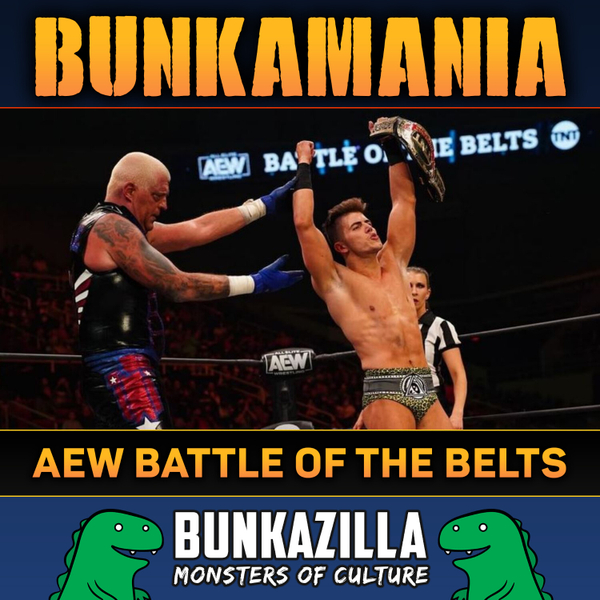 The Battle for AEW Belts (Battle of The Belts Review)

This episode of BunkaMania Live was recorded on Wednesday 12th January 2022 on the Bunkazilla UK Twitch Channel.

Jeremy Graves and Iain Boulton (aka The Dekker Dane) do their first check-up of All Elite Wrestling for 2022 as they run over some of the big matches and events that have taken place since Full Gear. The battle of the AEW World Championship saw two stellar matches between Hangman Adam Page and Bryan Danielson, CM Punk and MJF are on a collision course but the heated war of words is already upon us and the first-ever TBS Champion is crowned!

Let's not forget that there's an Undisputed Reunion in the promotion as well as brand new tag champions in the form of Jurassic Express.

The main bulk of the show looks at the Battle of The Belts TV Special which saw an Interim TNT Champion crowned and both the FTW and AEW Women's World Championship being defended. There's also a dose of Wrestling Around The World where our hosts quickly run down some of the most recent news developments in wrestling including Mickie James' shock appearance for the women's Royal Rumble, MLW taking WWE to court and Corey Graves being cleared for an in-ring return.

You can watch the video version of the episode here.