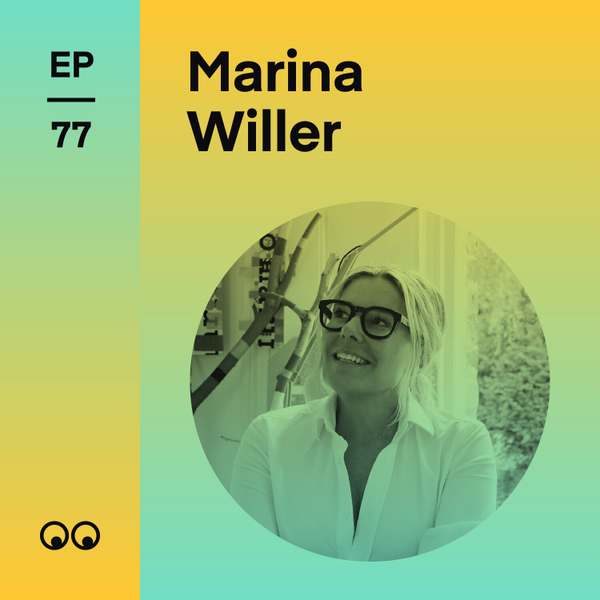 Our guest this week is Marina Willer, an award-winning graphic designer and filmmaker and one of Pentagram's many respected partners. Before joining the global agency, she was head creative director for Wolff Olins in London.

With an MA in Graphic Design from the Royal College of Art, Marina has enjoyed an incredible career so far. She's led the design of major identities, including Rolls Royce, Oxfam, Nesta and Amnesty International. She recently rebranded Battersea and Sight and Sound Magazine. And as a multi-faceted designer, she has even designed major exhibitions for the Design Museum, including Ferrari: Under the Skin and Stanley Kubrick: The Exhibition. Both were the most-visited shows in the museum's history.

Elsewhere, Marina's first feature film, Red Trees, premiered at the 2017 Canne Film Festival and was released worldwide by Netflix in 2018 to much critical acclaim. She talks about it fondly in this episode and shares many other fascinating insights into her amazing creative journey.

We talk about her process and inspirations. We learn more about Pentagram and how she feels about the world right now. We discuss the idea of "home" and how it feels to be in London post-pandemic. And she shares the joy of realising that work continues to surprise her, even after it's been 20 years since she famously rebranded Tate.

Season Four of The Creative Boom Podcast is kindly sponsored by Astropad Studio.

Want to hear the inside scoop from other artists, designers, illustrators and photographers about the highs and lows of being a creative?

The Creative Boom Podcast is a show that brings you candid conversations with new and established names from around the world as we discover more about their creative journeys so far. Bursting with insider career tips, honest business advice and incredible stories, each episode offers warmth, wisdom and inspiration to help you in your creative profession.

Hosted by Katy Cowan, the founding editor of Creative Boom, a platform she launched in 2009 to celebrate, inspire and support the creative community, particularly the underrepresented.

A journalist, writer and broadcaster, Katy Cowan is the founding editor of Creative Boom, one of the UK's leading platforms dedicated to the creative industries. She launched her magazine in 2009 with a mission to celebrate and support artists and designers, particularly those who are underrepresented. Today, her site delivers inspiration, insight and advice to seven million creative professionals every year.