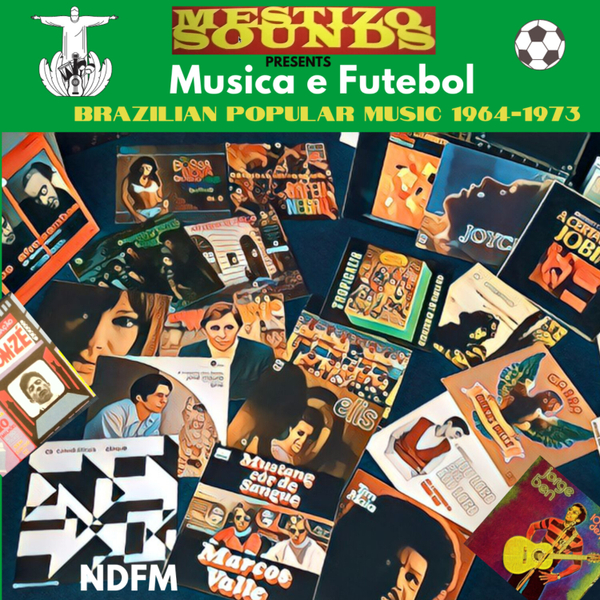 THIS SHOW IS A SELECTION OF BRAZILIAN POPULAR MUSIC FROM 1964 TO 1973. A DECADE OF GREAT MUSIC IN A BACKGROUND OF POLITICAL TURMOIL AND WORLDWIDE FOOTBALL SUCCESS.

The name for the show is taken from one of the most famous songs by Marcos Valle. This is “Paz e Futebol”. I replaced Paz (peace) for Música as this is the subject matter of the show.

Peace was not a description of those years as the 10 years covered in the show were a time of intense internal social and political conflict in Brazil. Bossa Nova (New Wave), the Brazilian homegrown jazz version, was the music style that many young musicians followed and developed during these 10 years from 1964 to 1973. At the same time, foreign pop and rock infiltrated the music of some of these young musicians. This was not well accepted by everybody in Brazil. It was a time of division between the MPB (Brazilian Popular Music) and the Jovem Guarda. The latter was a music movement influenced by the American Rock & Roll and followers of Elvis Presley and Little Richard. Roberto Carlos and Tim Maia were some of the musicians that embraced the electrification of music to the chagrin of the most nationalistic and, at the same time, left-leaning musicians of the MPB that oppose the Americanisation of the Brazilian music.

Then in the late sixties, the Tropicalistas (a hippie and psychedelic sixties movement in the Brazilian music) established a link between these two groups even though in a more avant-garde and dadaist outcome. MPB and Tropicalistas were both inspired by Samba and Bossa Nova's greatest artists and composers such as Tom Jobim, Joao Gilberto, Baden Powell and lyricist Vinicius de Moraes. In these ten years emerged an outstanding generation of talented musicians and performers. The list is immense. I highlight among them: Marcos Valle, Milton Nascimiento, Sergio Mendes, Caetano Veloso, Elis Regina, Chico Buarque, Jorge Ben Gal Costa, Arthur Verocai, Gilberto Gil, Tom Ze, Alceu Valença, Astrud Gilberto, Joyce, Edu Lobo Elza Soares, Tim Maia, Naná Vasconcelos, Eumir Deodato, Wilson Simonal, Flora Purim, Airto Moreira, Maria Bethania, MPB4, Os Novos Baianos and Os Mutantes. I can continue putting more names and I will still miss some of these great Brazilian artists of the 10-year-golden period. Only I hope this selection opens the curiosity for the extraordinary music of Brazil. One of the most musical countries in the world which have attracted music fans all over the world since the days of Bossa Nova.