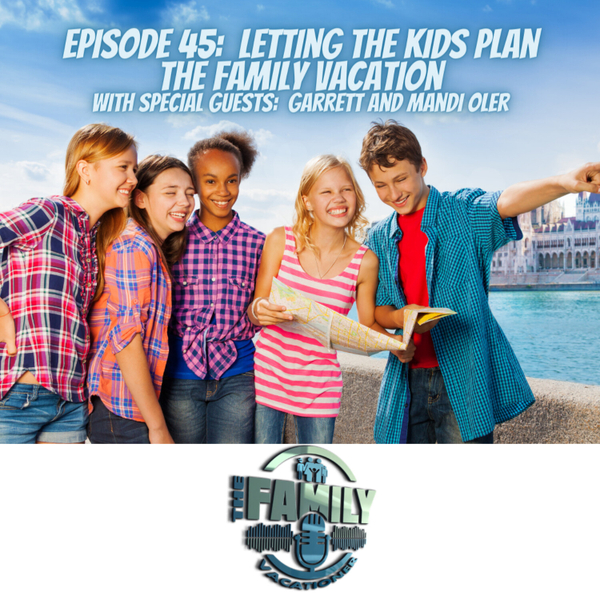 Garrett and Mandy live in Utah with their two sons who love to join them on their adventures and have even planned a few of their own and that's what we're gonna be talking with him about letting the kids planned the family vacation. Garrett Mandy, welcome to the show. Hey, thanks for having us on. We're excited to be here. We're glad to have you.

So what made you guys decide that you're going to turn over and what my mom would say is what possessed you to let your kids take over the planning of the family vacation?

Well, you know, they say in life that most of the decisions we make are all about pain avoidance. And really it didn't come about us intending to let the kids start planning our trips or at least have a much bigger input. It was more just kind of the opposite. We were avoiding some things that weren't working. So We don't know what year was it, 2016, I think we figured out we had planned a kind of elaborate trick to san Diego take the kids and we were doing everything that they would want to do.

So like San Diego Zoo, Seaworld, just everything fun for kids. Yeah, I mean we obviously wanted to do all those things too, but we figured that they would be over the moon excited and we didn't really tell them anything. Even after we got in the car, we never really told them where we were going, driving down to San Diego and made him, you know, guess where we were going and see what things that could pick out. Not only were they at a loss, like I have no idea where we're going, but they also weren't all that excited about the trip once they finally got clued into what was going on, so you know, the trip went well and as we did the things that we were supposed to do, things went well and we had a great time, but we swore we would just never do that to them again because we realized, you know, most of what's really fun about a vacation is the anticipation of it, the hope and looking forward to it.

And so we just decided then and there, like we're never doing that again. We're never surprising the kids with a trip because when we kind of robbed them of that excitement of looking forward to it. Our oldest is a Lego fanatic and he definitely got that from his mother, but we, you know, we love lego and we show up at Legoland and he's just kind of like, well, cool, okay, great, you know, and I had envisioned this because my expectations were probably way beyond what they should have been, but I had envisioned him just squealing and running around and being so excited and he just kind of wandered through and cool, this is cool.

And he was at the age, he was a prime age for being there and so there really wasn't any other excuse for his lack of enthusiasm then, just that we hadn't given him enough time to look forward to it and that's kind of sad, you know, we didn't give him that opportunity to have the hope for it. So yeah, so really going back to your question, the idea to really start to clue them in came from just us not wanting to leave them out, you know, that's what really got it started.

How old were your kids when they planned the family vacation for the first time?

So they were about five and eight when we went to San Diego. And so it was the very next trip after that where we said we're not doing that again, you know, at five and eight, they were old enough that they deserved to say in what we were going to do. So that's about that age is when we changed the way we planned our trips.

Okay, so exactly how did this work set it up for us, how much of the vacation did they end up planning?

Listen to the rest on Episode 45!