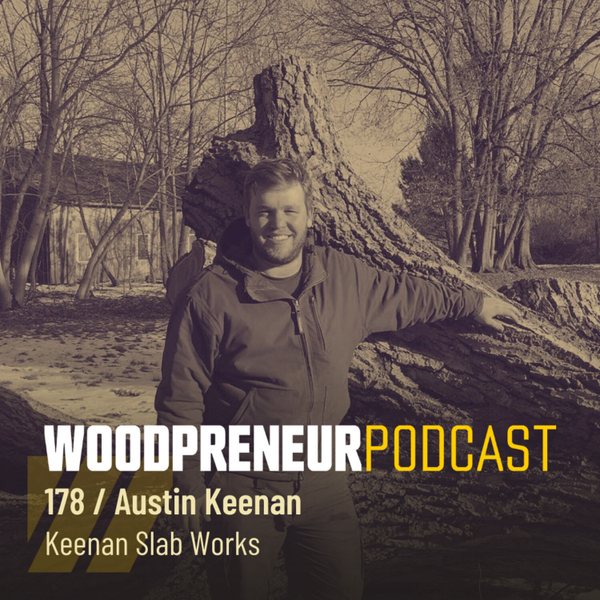 Welcome back to a brand new episode of the Woodpreneur Podcast. Today, your host Steve sits down with Austin Keenan of Keenan Slabworks. Austin started his company back in February of 2017 with his father who had been looking to retire from his job as an attorney and had always enjoyed dabbling in woodworking.

Originally, the project was only supposed to be a hobby, it was never supposed to grow into a business. However, they started to get paid to mill for people, dry their wood, or build things for them, which turned that plan around. When they were hired to do their first log removal, which was a large black walnut from a nearby town, they realized that they did not have the equipment needed to do any urban log removals.

“We didn't even have a mill. We were renting a chainsaw from a rental facility nearby and trying to hack our way through some of these logs. Getting started, we had no idea the differences in chainsaw chains or anything so we kind of butchered a couple of the initial first logs.”

Started as a Hobby and Grew from there

Since Austin and his father jumped into woodworking intending for it to be a hobby, they ended up doing some things inefficiently early on, but their enthusiasm for the process and learning new things kept the excitement going strong. One realization that hit the pair quickly was the need for a bandsaw mill, and after researching many different options they purchased one, which fulfilled their desire to learn new skills.

The bandsaw mill ended up becoming part of the attraction for their business early on. People would come by because they had never seen a bandsaw mill before and they wanted to try to use it. Austin and his father happily demonstrated by tossing a log on the mill to showcase what it could do, and then people started asking to buy material from the pair of them for their own projects.

Though Austin had no intention of developing it into a business, he thought it was a really cool project and his friends thought so as well. Whenever he would post photos to his personal Facebook account of a project they worked on, it would get a lot of interest, and one of his customers ended up providing Austin with advice that wound up turning his hobby into the business it is today.

“I was speaking with a customer, he was a woodturner and he said, “Hey, you should try selling some of your slabs on Facebook marketplace.” At the time, I had no idea what that was and I didn't know how to use it. So of course it was something new to learn, and we made a listing. We milled 60 or 70, black walnut slabs and put them on Facebook Marketplace, and those got 20,000 views in less than a day.

I realized that this is incredible! This is free marketing right here. I was getting messages sent to me like every three to five minutes, I had to put my phone on silent when I went to bed at night and I woke up and I had like 100 messages that I had to respond to. All from this tool that I didn't even know existed.”

We cover the business and marketing side of the sawmill, tree service, furniture making, Urban Wood, and woodworking industry. If you're a woodworker, sawmill owner, or any other entrepreneur and/or business owner in the wood industry, you need to check out this podcast.

Each week, we interview business owners, large-scale companies, entrepreneurs, makers, and designers while also offering marketing and business advice that will help you grow your business and increase your profits. Tune in every Thursday!