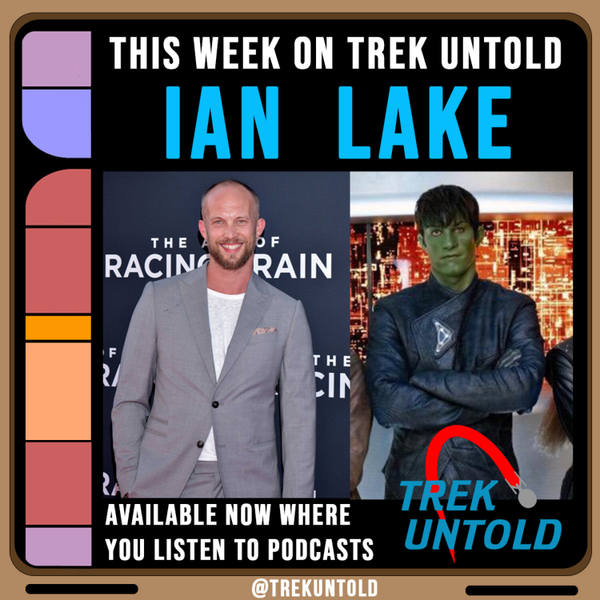 Ian Lake appeared in two episodes of the third season of "Star Trek: Discovery" as Tolor, an Orion who runs a salvage yard for his aunt Osyraa of the Emerald Chain. He appeared first in "Scavengers" and again in "The Sanctuary."

Ian talks about the highly secretive audition process for DISCO, the makeup transformation process of physically becoming an Orion and the moment the character came together for him, sharing the screen with Soneqhua Martin-Green & Michelle Yeoh and having a fight scene with them, advice from Doug Jones, ad-libs and deleted scenes, being directed by Jonathan Frakes and killed by Janet Kidder in the same episode, and how Discovery is one of the best sets he has ever worked on.

Plus, how Ian's Shakespearean training has affected his acting, being in "The Murdoch Mysteries," "The Art of Racing In The Rain," and more.

Support Trek Untold by checking out our merchandise at https://teespring.com/stores/trekuntold or become a Patreon at Patreon.com/TrekUntold.

Trek Untold is sponsored by Triple-Fiction Productions, a US-based company that 3-D prints Trek-inspired prop replicas for fan films and cosplayers, as well as accessories and playsets for all iterations of Trek figures through the years. Visit them at Triple-Fictionproductions.net.

Trek Untold is sponsored by Treksphere.com, powered by the RAGE Works Podcast Network, and affiliated with Nerd News Today.

"Trek Untold" is the Star Trek podcast that goes beyond the stars! This show features guests including character actors, stunt performers, directors, writers, VFX artists, and the behind-the-scenes people who make the Star Trek universe boldly go where no sci-fi franchise has gone before.

The Trek Untold podcast is not endorsed by, sponsored by, nor affiliated with CBS, Paramount Pictures, or any other Star Trek franchise